My life is turning out neither the way I planned it, nor dreamed it.

I dreamed of happy. Of belonging. Of place. Of love everlasting.

I have always wanted a tiara. A sparkly symbol of something … I don’t know. Acceptance? Esteem? Beauty? Altruism?

One year, as we were searching for decorations for the prom, my students found an old box up in the attic of the high school in Gold Beach. A veritable cornucopia of prom treasures. Sashes. Gold pins. Glitter and sparkles. And … a tiara. I put it on to a round of applause.

I wore that tiara all day. Then I put it away. After all, I did not earn it. No one voted for me. I didn’t inherit it from some other princess. I found it in a dusty old box.

Someone once promised to buy me a tiara. It never materialized, so I stopped asking and I did what I should have done years (decades) ago.

I bought my own tiara. The tiara doesn’t have a name the way many of my favorite objects do. But it is sitting in a place of honor atop Molly’s head on my jewelry box. 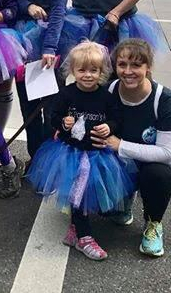 Last fall, my Sole Support for Parkinson’s Resources of Oregon team was comprised of friends from near and far. We ranged in age from 70-ish to four. From 6’ 7” to 22”. (The four-year old was Lily, daughter of my sorority sister, Christy. The 22” was Nettle, a lovely golden retriever.) In addition to the tutus we all made, I made bracelets for the team to commemorate the walk and thank them for their love and friendship. I even made one I hoped would be small enough for Lily.

The bracelet for Lily was big, and early on she began to play with it, causing it to slip up and down her arm. Christy matter of factly notified Lily that the bracelet had been a present from “Princess” Jane and she had better not lose it. Lily’s eyes widened as Christy went on to explain.

“See?” she asked, pointing to my tiara. “Princess Jane is a real princess, she has a tiara. She gave you that bracelet, and you need to take care of it.”

Not being privy to this exchange, I began to wonder why this lovely little girl kept stealing surreptitious glances my way. Lily wore that bracelet all day, taking care that it didn’t slip off her wrist, making sure nothing happened to it.

“Look at Princess Jane,” Christy explained. “If she can walk, so can you.” Lily cast glances my direction throughout the brief walk, my migraine causing me to cut my participation short.

After our walk, we sat at picnic tables, snacking and talking about our day – the vendors, the crowd, the joy of friends you’ve known for almost 40 years. Christy began taking pictures of Lily as she stood between the tables, still resplendent in her tulle tutu, numerous leis, and bracelet.

I walked softly over to Lily and knelt down to look into her eyes.

“Lily, would you like to wear my tiara for a little bit?”

Her small hands went to her mouth as she almost trembled with excitement. She looked to Christy, then back to me, and nodded just a touch. I took the tiara off my  head and placed it gently atop hers, making sure it was perched snuggly.

Lily stood rooted to her spot, as if the slightest move would break the spell. Christy kept taking pictures while I quietly talked to Lily about tiaras and princesses.

How Lily could have a tiara of her own. How important it was to be a good princess, help other people, and be kind. She nodded but didn’t say a word.

After just a few minutes I sat down while Lily continued to stand straight and tall. Then she pivoted ever so slowly and carefully toward me, took the tiara gently from her head, cradled it securely in her tiny hands, and gave it back to me.

“Thank you for taking such good care,” I praised her, then whispered, “Are you sure you don’t want to wear it more?”

Lily gave a quick shake of her head, smiled again, and went back to her mother. Christy knelt down and hugged her, as Lily started to recount the story of how she wore a real princess’ tiara.

Lily will someday know that I am not a real princess. But she will also know that you don’t have to wait for someone to give you a tiara. You make your own tiara every day of your life.

Be responsible for those who depend on you.

Be kind to all.

Be a person you would be proud of.

And I have realized that I DO have what I dreamed of.

View all posts by Jane Miller